Solalinde, appeals for support in the U.S. to end the humanitarian crisis and violence in Mexico 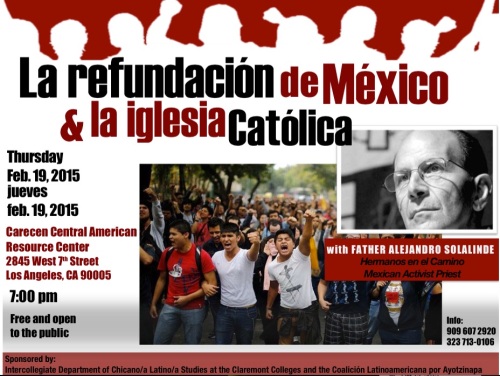 Mexican priest Alejandro Solalinde is in LA for a 3-day visit to talk about the human rights crisis in Mexico.

Father Alejandro  Solalinde, appeals for support in the U.S. to end the humanitarian crisis and violence in Mexico.  Community members and civic leaders welcome him to the City of Pomona.

Father Alejandro Solalinde, a Mexican priest, who is a leading voice on international human rights, will speak on the steps of Pomona city hall on efforts to address social justice and human rights issues in Mexico.  Solalinde has chosen the Pomona City Hall site for a press conference because of its significance as the first city in the United State to pass a resolution requesting an international investigation into the disappearance of the 43 Mexican students of Ayotzinapa.

Since a December 1 Pomona city council meeting, adopting a resolution calling for an independent international investigation into the disappearance of the 43 college students, a number of government bodies on both sides of the Mexican border, including the California Senate and the San Francisco board of supervisors, have taken up similar resolutions. Last week, the U. N. Committee on Enforced Disappearances, in reference to the presumed killing of the 43, focused on the disappearances as being part of worsening human rights problems caused by the police, military, and government inaction.

Father Solalinde, a Catholic priest who has devoted his life to the plight of Central American immigrants traveling through Mexico, is doing this press conference at the beginning of a three day tour with university, community, and religious organizations and leaders in the Los Angeles region.   In 2012, he received the National Human Rights Award from the Mexican government for his work as the founder and director of Hermanos y Hermanas en el Camino(Brothers and Sisters on the Road), a shelter for migrants in the southern Mexican state of Oaxaca.

What:              Press Conference to highlight the serious crisis that Mexico is facing in terms of the prevention, investigation and punishment for enforced disappearances and recognizing the significance of a Pomona City Council resolution calling for an independent investigation of the 43 Ayotzinapa students.

One response to “Solalinde, appeals for support in the U.S. to end the humanitarian crisis and violence in Mexico”